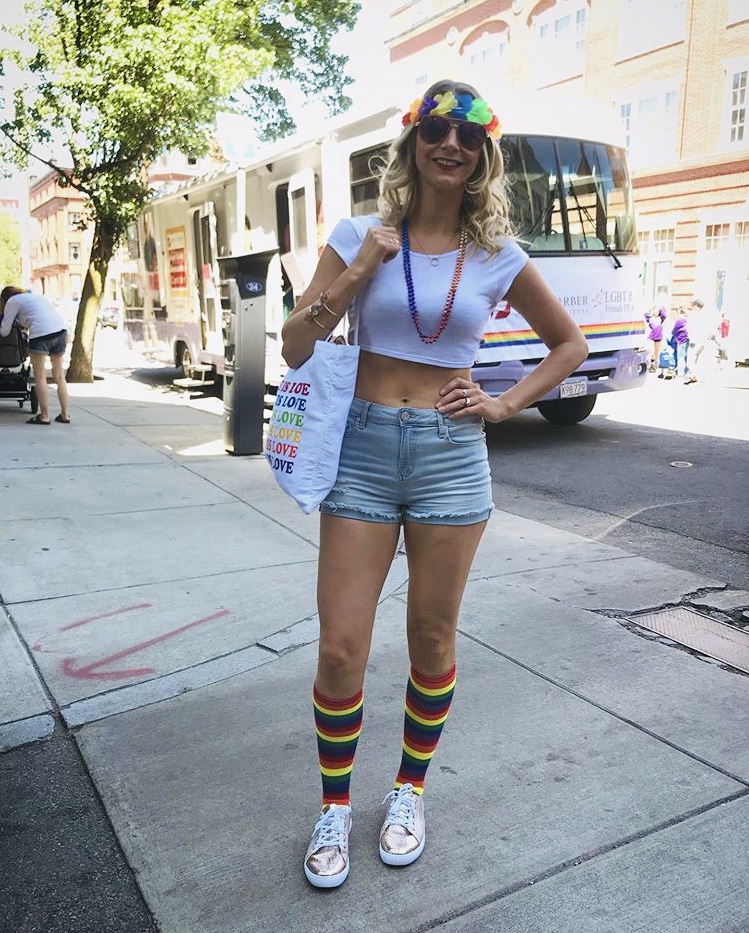 Pride in the Back Galley: The ‘Other’ Gay Flight Attendant

June is Pride month, and you know what that means—Corporate America vomiting rainbow gear and #loveislove ads for thirty days. And if my shampoo can pander to me via free rainbow hair ties, then I can certainly get in on the action, too. We’re talking gay things. Specifically, what it’s like to be a non-gay-male LGBTQ Flight Attendant.

The airline industry is notoriously gay friendly. Indeed, my company dubbed itself the “gayest airline” some years ago. While I don’t know the methods used to calculate this apparent win, or if anyone else agrees, it does feel good to work in an inclusive environment. LGBTQ flight attendants abound. It is the stuff of pop-culture characters and sassy memes. When we travel, we expect and often assume that our flight attendants will be gay.

But when we think of ‘gay flight attendants’, there tends to be a singular version of this—a specific archetype that comes to mind. The gay male flight attendant. Flitting through the air, serving up snacks and shade at 30,000 feet.

These stereotypes are sometimes true, sometimes wrong, and sometimes offensive. But what I can’t help wondering, often and especially during Pride month, is What about the rest of us?

Lesbian, bisexual, transgender, genderfluid, queer, and about any other label you can think of can be found in the ranks of airline staff. But somehow, these LGBTQ flight attendants are largely left out of the discussion of stereotypes and workplace inclusivity. And we feel it.

Since I’m a member of this LGBTQ flight attendant community, and since it is my blog, I’m going to share a non-gay, non-male perspective. Spoiler alert: It wasn’t always sunshine and rainbows.

Pride is not just a time of year or a rainbow parade. Pride is a frame of mind. It is something that many of us—even the most passing—have struggled to feel.

When I started working as a flight attendant seven years ago, I used to say I felt like a unicorn. It seemed to me that in my pool of coworkers all the men were gay, and all of the women were straight.

And not just regular straight—full face of makeup, mandated lipstick, and sky-high heels straight. Manicure all the time straight. Contouring of the face straight.

For those of you who don’t know me, hi, I’m Toni, and I’m bisexual.

It feels funny writing those words because, for as many years as I’ve been a B in the LGBTQ community, it is a fairly recent feat that I’ve taken to using the label.

For many of those years the word “bi” felt shaky, uncertain.

So, I didn’t use it. I was straight when I was in a straight relationship. Gay when I was in a gay relationship. My partner defined me, and that felt easier than deciding on and committing to one label. I’ve never wanted to define myself. What if I change my mind? What if one definition can’t fit all of me and I’m somehow limited by taking it on? And who cares about labels anyway, right?

Today, I like my label. I wear it because it fits. It makes sense. It is accurate, comfortable. But for a long time, the label felt ill-fitting, constricting. And working as a flight attendant made it worse.

Back in 2014, when I became a flight attendant, I was in a long-term relationship with a woman I planned to spend the rest of my life with. I was gay for all intents and purposes. Or, gay-ish, at least.

And this is why I felt like an anomaly at work. Gay guys, straight girls, and then there was me…whatever I was.

In some ways, I liked being a unicorn. Call it my Aquarius nature, I’ve always felt drawn to being “different”, “unique”, “against the grain”. But being a unicorn could also feel uncomfortable, isolating, lonely.

To hear how I got started working as a flight attendant, check out last week’s post: My Flight Attendant Origin Story.

You know that thing some straight guys do, when they assume every gay man is interested in them? When they say things like “I don’t care who’s gay, as long as they don’t hit on me.” This “non-bigoted” form of homophobia causes gay people to focus inward and censor themselves. Set your gaze forward so they don’t wrongly think you’re checking them out. Keep your sentences short, so you don’t sound like you’re flirting.

When I was in college, I had this fear of being accused of cheating. Don’t ask me why, because I never was cheating, but the fear of that perception was pretty strong. During exams, if I needed to think about a question before answering, I would look straight up to the ceiling, fearing if I looked around it would appear as though I were stealing a glance at someone else’s work.

And this is what gay people have to do daily. Break our necks staring up at the fucking sky to avoid making straight people uncomfortable.

We take on any discomfort ourselves, preemptively.

I did this a lot at work.

I give being an LGBTQ Flight Attendant two thumbs up!

I remember being in the back galley of an airbus with two of my coworkers, both women a solid 15 years older than I was. The blonde one mentioned her niece. And her niece’s girlfriend. An eye roll accompanied, followed by “I just don’t understand it.” She couldn’t understand how or why her niece was gay—why anyone would be.

I had been in a relationship for about four years at that time. My committed, monogamous, healthy, lesbian relationship. She obviously didn’t know this.

I was taken aback. Stunned.

Not only was this woman ignorant, but she was vocal about it—at work. In one of the gayest industries you could possibly choose to work in. Not only did she think I was straight, but she thought I was an ally in her distaste for gay people.

It is an interesting feeling, being asked to join in on your own denigration.

Like if you’re getting jumped and the assailants stop to ask if you’d care to punch yourself in the face.

Nobody likes being disliked.

The other coworker, a woman with glasses and short, curly hair, wearing not a stitch of makeup, interjected.

Truthfully, I don’t remember what she said. Perhaps something along the lines of ‘I’m attracted to the person, not their gender’. I didn’t care what she said after those first words. I was rapt with this person’s honesty—in such stark contrast to my silence.

Confidence comes with age, and in aviation it also comes with seniority. Maybe being younger, and new to the job, and finding myself in new situations made me meek in ways I would not be today. Or maybe that’s all bullshit and she was just better at accepting herself than I was.

I appreciated my LGBT coworker stepping in to share, to correct, to call out. I was grateful she was there in that moment to stand up for herself—for both of us, without even realizing it.

Today, when I think back, there is a scratch of wonder. Maybe she did realize it. Was she even telling the truth?

She turned to me after the other crewmember left.

“You were just going to stand there and not say anything?”

I was going to stay mum and then surprise people when I mentioned my girlfriend at work—or worse and more often, waited until they asked.

“Do you have a boyfriend?” The setup made it easier to say. Looks of surprise. Stammers of “Oh, I’m sorry, I assumed.”

No problem, guys. It wasn’t all their fault for assuming.

For those of you who don’t know, “passing as straight” means exactly what it sounds like. People assume for one reason or another that you are heterosexual—”normal”–  and treat you accordingly.

Passing made me feel safe. Not physically—I’ve enjoyed the privilege of being a white woman and conventionally attractive, of not having to worry for my physical safety. But passing made me feel safe from scrutiny. From awkward conversations and silences. From straight women wondering if I was attracted to them. (Spoiler alert: I’m not.) From curious women asking me a million questions. Or wanting to use me for an experiment. From men fetishizing my relationship in gross ways. From intolerance and disdain. From eye rolls and sideways glances and ‘I just don’t understand’s. I was shielded from so many of the things that folx in my community suffer. Because of how I look. How I carried myself in the world.

Now it feels shameful. Then it felt essential.

I don’t feel so much like a unicorn. We have way more openly gay and bisexual women flight attendants in 2021 than we did in 2014. We have several trans crewmembers. We have pans and polys and all spectrum of the gender/sexuality diaspora. There is more visibility for the rest of us, and because of that being seen doesn’t seem so scary.

My basic bi self is old news now. A black and white film, stale Jiffy-Pop. A throwback to when times were different, less colorful.

I’m happy that times have changed.

I’m happy that I’ve largely let go of the desire to “pass”. These days I’m more offended if someone thinks I’m just straight. (No offense, heteros, but being bi ups my cool factor, and I need all the cool points I can get.)

I am grateful to work in an industry that embraces the LGBTQ community. To be a part of a safe space that young people might want to come join. I’m proud of my airline for promoting equality and being the “gayest airline,” according to themselves. I’m more proud that, based on our staffing and in-house promotions, they actually mean it, unlike a lot of large companies.

To be clear, the blonde woman from my story is in the minority in my workgroup. This job has a way of bringing people into new perspectives, greater tolerance, and more love. With any luck, her perspective shifted that day in the back galley.

Pride is not just a time of year or a rainbow parade. Pride is a frame of mind. It is something that many of us—even the most passing—have struggled to feel. It is a goal post and it is an anthem. It is a lot of things to a lot of people who fill a colorful, beautiful spectrum. I honor each and every one of you reaching for that feeling inside. And I’m grateful to all those who have sung the anthem out loud, who have made it possible for us quiet ones to find our shaky voices. To stand, to speak, to exist without apology.

My People: I love you. Happy Pride. 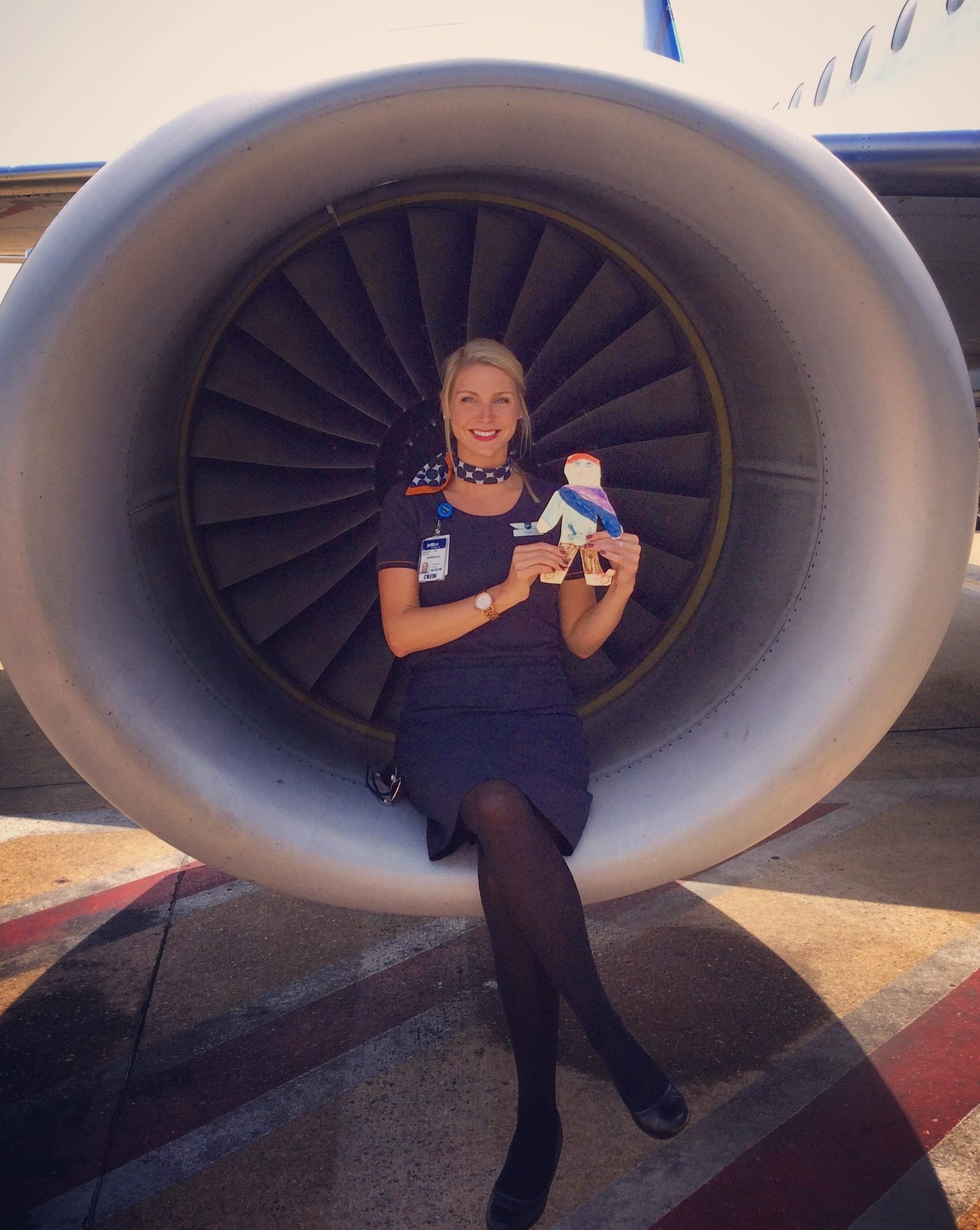 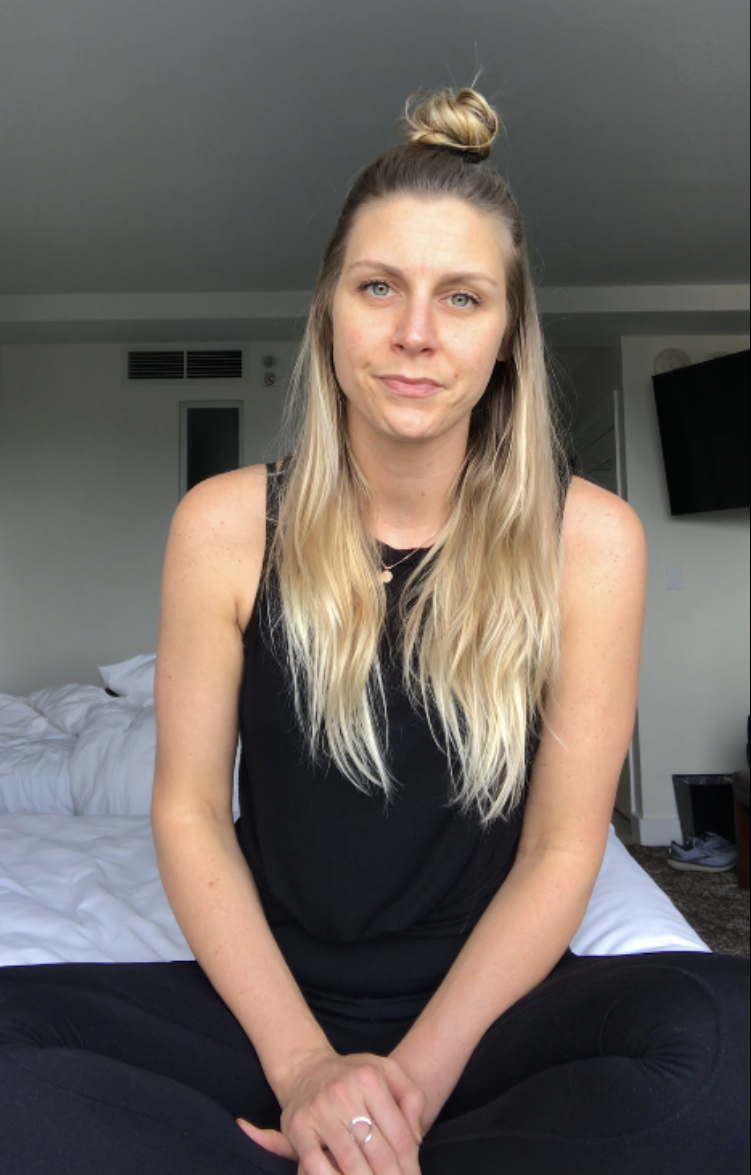